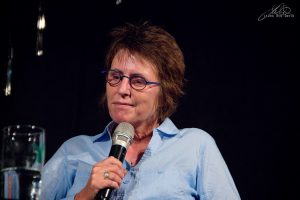 Kay is a tour guide, pianist, cartoonist and motivational speaker. In 2010 she and her American friend, Kristine Luken, were attacked by two terrorists. Kay sustained multiple knife wounds. Kristine did not survive. Since 2014 Kay has addressed a variety of audiences all over the world, telling of her ordeal.

In her role as representative of Palestinian Media Watch, she lobbies Western governments to end the foreign aid that, until today, rewards her would-be incarcerated murderers.

She has done a TED talk, delivered a speech to the United Nations and has been interviewed for radio and television inside and outside of Israel.

Together with a Palestinian friend, she has created “The Yellow Brick Road,” an educational, counter-radicalisation project, that teaches children in a refugee camp emotional intelligence, empathy and courage.

The terror attack in which Kay almost lost her life, was the subject of an acclaimed Israeli documentary, “Black Forest,” broadcast in 2018.

Kay, whose actions led to the capture of her assailants, has been recognized by the Israeli Police and the Israeli Security Agency for her courage.